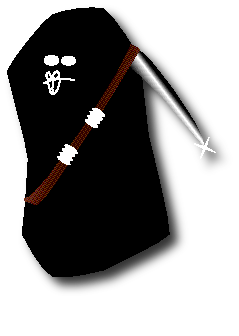 The Hamster of Sorrow

The Hamster of Sorrow Strikes Again

One who is enlightened can enjoy hell

I also play drums with a band called Private Circus.

I would have a bunch of drumming links here, if I didn't hate pages of links. In fact, I used to have just one link here, to a yahoo page, but they changed it, and I didn't know. Since I'm not on a very active page maintanence schedule, I just bagged it.

What else do I do? I read, voraciously. We have on the order of 600 books in our tiny apartment, and we are regular library folk.

I also play guitar, fiddle with my Linux box, and listen to tons of music.

Rumination II:
When I was a young lad
I had many a trail
to follow down to brookside
or past the county jail

Now in that jail's a bad man
He's done many a crime
His name is Tom, don't get it wrong
And he will do his time.

Tom had hurt some people
of this there is no doubt
but the judge had to write, for many a night
to work this whole thing out

She went up to the congress
and told them all the tale
This man is a songwriter,
but he needs to go to jail.

His songs are very catchy
be sure and hear me out
but it's the topic of his songs
that this is all about.

Now that I have {a suit | a gun | root} I can rest, because I am officially in control.

You can't tell me anything about my job, because the fact that I got here means I know it all.

I'll get to your problem when I feel responsible.